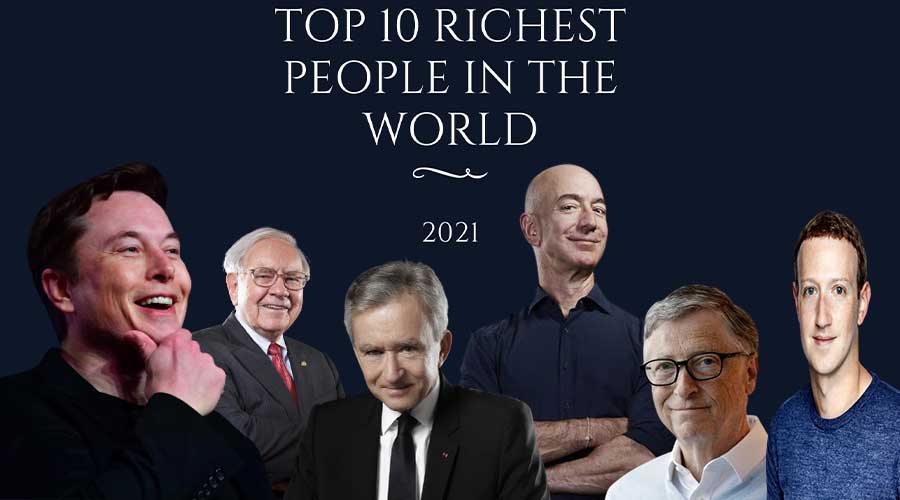 In November, 2021 Elon Musk has surpassed Jeff Bezos to become the world's richest man. He made a promise to become the World's first trillionaire and that seems very promising now.

Jeff Bezos has been on the top spot for the most part of the past few years but now Elon Musk has surpassed him and Elon is moving much ahead of his competition. However, the biggest turnover was Larry Page surpassing Mark Zuckerberg to take the 5th spot in the list.

Here’s the list of the top 10 richest people on the planet:

Elon Musk’s revolutionary ideas inspire millions of people. His idea of changing transportation in every field (on Earth, through Tesla and HyperLoop, and Space through SpaceX) has made the change feasible. The ideas, which were once considered pointless, have now become reality and a role model for society. He owns 21% shares of Tesla and his company SpaceX is now has a value of $46 billion. To read more about him, check out Entrepreneur of the Millenium

Jeff Bezos founded e-commerce giant Amazon in 1994 in his garage. He also owns The Washington Post and Blue Origin. Amazon notched $280.5 billion in revenue in 2019, with a record net profit of $11.5 billion. In 2019, he divorced his wife MacKenzie Scott and transferred a quarter of his Amazon stocks, i.e. 4% of Amazon. He now owns an 11.1% stake in the company. In April 2020, during the pandemic, he announced a $100 million gift to alleviate hunger from America during the challenging times.

Bernard Arnault has an empire of 70 brands including Louis Vuitton and Sephora. LVMH acquired American jeweler Tiffany & Co. for $16.2 billion in the biggest luxury brand acquisition ever. He entered the yacht business in 2008 and bought Princess Yachts for 253 million euros, then he took control of Royal van Lent. He pledged 200 million euros for the repair of the Notre Dame cathedral after it caught fire in April 2019. He also surpassed Jeff Bezos to become the richest man, but not for long and Jeff reclaimed his spot.

Bill Gates, with his childhood friend, Paul Allen founded Microsoft in 1975, which went on to become the world’s largest personal computer software company. In 2020, he stepped down as the CEO of Microsoft and with his wife, started the Bill and Melinda Gates Foundation, the world’s largest private charitable foundation. He recently filed for divorce from his wife after 27 years of marriage. To date, he has donated $35.8 billion worth of his Microsoft shares to the Gates foundation.

Co-founder and board member, Google

Larry Page co-founded Google in 1998 with Sergey Brin. Along with him, he also invented the PageRank algorithm for Google’s search page. He is also a founding investor in a space exploration company Planetary Resources. He also funds Kitty Hawk and Opener, a flying car startup.

Mark Zuckerberg co-founded Facebook in 2004 along with his college roommates. At the age of 23, he became the youngest self-made billionaire in 2007. In December 2013, he donated 18 million shares to the Silicon Valley Community Foundation. Facebook is the most popular social networking platform in the world. In 2014, Facebook acquired WhatsApp messenger for $19 billion and they also acquired Oculus for $2 billion. In December 2015, Mark and his wife announced that they will be giving away 99% of their Facebook stakes over their lifetimes.

Co-founder and board member of Google

Sergey Brin co-founded Google in 1998 with Sergey Brin. Along with him, he also invented the PageRank algorithm for Google’s search page. In 2019, he stepped down as president of Alphabet, the parent company of Google. He is funding a high-tech airship startup.

Steve Ballmer is the former CEO of Microsoft, bought the NBA team Los Angeles Clippers in 2014 after retiring from Microsoft. He donated over $2 Billion to a donor-advised fund in order to lift America from poverty. He also donates to nonprofit companies developing software for the government.

CTO and Founder of Oracle

Larry Ellison is the CTO and co-founder of tech giant Oracle. He owns about 35.4% of Oracle. In 2012, Ellison bought a Hawaiian Island Lania, where he has built a hydroponic farm and a luxury spa. In 2018, he bought 3 million shares of Tesla and became a board member.

Warren Buffet is one of the most successful investors of all time. He is known as the “Oracle of Ohama”, and the investment community follows his investment picks and comments on the market very closely. He bought his first stock at the age of 11. He runs Berkshire Hathaway, which owns 60 companies, including Duracell, Dairy Queen and many more. He has promised to donate over 99% of all of his wealth. He has donated $41 billion in charity so far.

If you liked our blog please make sure to let us know in the comment box below. To stay updated about our latest blogs make sure to subscribe to our free newsletter.

We live in the era of scientific advancement and we are surrounded by technology....

In our previous blogs, we discussed how to be a successful...

When we say the word “VIDEO GAME”, things that come to our mind are fun, enjoyment...

While India is still fighting hard against...

We all know how dangerous the coronavirus is. In our previous...

A backlink is a link pointing from one webpage to a different website. The...

Content writing, a field where everybody thinks they are an expert until or unless they...