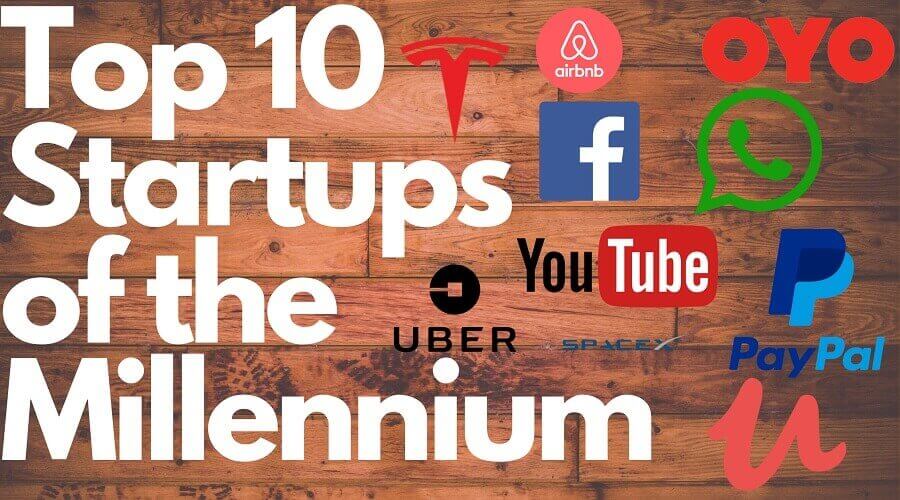 Top 10 start-ups of the millennium

21st century, the era of the start-ups, the world has seen many start-ups in this small spam of time. While many of these start-ups were not able to make any mark on our lives, some really changed our lives and made the world notice their presence.

Start-ups are the lifeline of any economy; sometimes the idea of the start-up is enough to get the success, an entrepreneur wants but most of the times hard work is required to make a start-up reach its potential of success. Here we created a list of top ten start-ups of the millennium which have a deep impact on our lives. There may be many other start-ups which are more successful than the ones listed below but the list depends on other factors too; mainly the impact of these start-ups on our lives and the ideas behind these start-ups.

Facebook was founded on 4th February 2004 at Harvard University as ‘’TheFacebook.com’’. When it started, the membership was limited to only the Harvard university students. Later when it became popular among students, it was expanded to all other colleges in the Boston area. Then after some time, thefacebook.com was made available to most of the colleges and universities in U.S.A and Canada. In 2006, Facebook became so popular that it was made available to anyone who was above 13 years old and had an E-mail account.

Facebook is considered among the top five technology companies now with Apple, Amazon, Microsoft and Google. Facebook is one of the world’s most valuable company.

Facebook allow its users to interact with people from around the world. It has more than 2.2 billion active users from all around the globe which are free to chat with anyone they feel like. People can post about their interests and what’s on their mind. Numerous celebrities are on Facebook nowadays to interact with their fans and that’s not all, Facebook now has Instagram and Whatsapp as their sub-brands; the two most used social media sites by the generation.

Airbnb stands for Air bed and breakfast and it was founded in August 2008. It lets people to rent out their properties or spare rooms to guests. Airbnb is just the merchant between the two and takes commissions from both sides.

The idea came when the founders were not able to afford the high rents, due to which they put an air mattress in their living room making it a bed and breakfast thing and earning decently from that idea. Then, they put together a website which allowed people to lodge small-term living quarters and breakfast who were not able to book hotels. Their first customer came when a business conference was held in the city and all the hotels were full. The founders then expanded their business to other cities and now to most of the countries.

It was founded in March 2009. The idea of the start-up came when Garrett Camp and his friends spent 800 dollars to book a private driver, Camp wanted to reduce the cost of transportation as it was very high so he came up with the idea of sharing the ride which will not put much pressure on the pockets of the commuters. In the beginning, the company only started black cabs which were shareable. The idea became a sensation over time as everyone was interested in saving. Later, Uber transformed and now have many different type of rides. They provided the freedom of choice to the customers.

The Uber is now diversifying and trying new businesses which may provide more success like Uber Eats, Uber Auto and etc.

Whatsapp is the world’s most popular messaging app since the beginning in January 2009. The founders were former Yahoo employees. They wanted to work for Facebook but got rejected in Interviews.

The idea came when the founders realized the potential of the App industry on Appstore. They decided to make a messaging App which will show the status of the user next to their name. The founders named it Whatsapp to make it sound like ‘’what’s up’’.

Earlier versions of the App were kept on crashing which made one of the founders ‘Koum’ giving up on the Start-up idea and look for a job but the other founder encouraged him to wait for more time and finally, Whatsapp got the popularity among the users when Apple launched the push notification which will ping the user when the user gets any message.

Whatsapp was later acquired by Facebook in 2014 with a price of 16 billion dollars.

Elon wanted to reduce the cost of space travel to colonize the planet Mars and for that purpose, he founded the Space X company in May 2002.

In 2001, Elon Musk wanted to regain people’s faith in space exploration and for that, he started a project which involved plantation of plants on Mars soil by landing a miniature experimental greenhouse project. For that, Elon tried to buy cheap affordable rockets but failed to do so. On the flight back home, Elon realized that he can start his own company that can make the cheap rockets that he wanted. He calculated that the raw material to build the rocket is very cheap and hence he hired a few experts and started his own company which was later named as Space X.

Paypal was first invented in 1998 as Confinity, but Paypal had its first offerings in the year 2002. Confinity was a company that developed security systems for handheld devices. It had no success in that business so they switched to a digital wallet. It is a company which provides its users with online money transfer options all over the world. It operates as a payment processor between the two parties and takes a fee for providing facilities like fast payment, memorizing the passwords, safe and secure gateways etc.

Elon Musk was optimistic about the success of the online money transfer business in the future.  So, he backed Confinity and merged it with X.com (An online banking company founded by Elon Musk). Thus terminating all other processes of X.com and solely focusing on Paypal.

Three former Paypal employees; Chad, Steve and Jawed started YouTube in February 2005. The idea came when the founders were looking for some videos online but were not able to find anything off liking. So they felt like starting an online video sharing site. In the initial planning stages, the founders thought of sharing videos on one particular topic but later they decided to let share any video on any topic.

Google bought the YouTube in November 2006 and YouTube operates as one of Google’s subs. YouTube has become a part of our generation’s daily life. From learning to enjoying music, from live streams to watching the oldest of videos, YouTube is being used by the generation for every purpose.

The company was founded in July 2003 by engineers Martin and Marc. It was named after the famous scientist and inventor ‘’NIKOLA TESLA’’. Formerly, Tesla was called Tesla motors. Elon, J.B and Ian were the next three employees of the company so they are also called the founders of the company.

Tesla has been and still is, the world’s best electric passenger car selling company in the world.

The idea came erupting to Martin and Marc when GM recalled all its electric cars in 2003; they understood the potential of electric cars market in the future. The founders needed funds to start operation and that’s where Elon Musk came in. From the start, Elon musk stated the long term plan of Tesla is to make affordable electric vehicles for the common man. Tesla started with a premium sports car and now making mainstream vehicles.

Tesla also started their venture in clean energy for the future where Tesla manufactures Solar panels and other clean energy storage things.

Oyo is one of the world’s largest and fast-growing hospitality chains. When it was founded in 2013, it only consisted of budget hotels but today, OYO is everywhere from luxury rooms to budget hotels. They have their own chain of luxury hotels. OYO has expanded its business to many countries now.

In 2012, Ritesh started Oravel stays which enable users to enlist and book a budget hotel. After exploring the market in India and understanding the needs he then launched OYO in 2013. OYO basically leases or franchises hotels providing customers with the best experience of hotel stays.

In 2007, Eren built software for the live virtual classroom and saw the potential in the idea and hence found the company with the other two founders and launched the site in 2010. The founders tried to raise funds by getting money from investors but they got rejected many times as their idea was not able to impress the investors.

They took the matter in their hands and launched the product Udemy-‘’the academy for you’’ in May 2010. Within a short span of time, there were thousands of courses online available and the customers started liking this new way of learning.

In another attempt, the founders again tried to raise the funds required to grow and this time they were able to impress the investors and got the required funding.

Udemy has more 50 million students now and they also provide courses for professionals too.

These are the top ten start-ups that are most successful in the 21st century. This is no ranking; this is merely an effort to let everyone know about the best start-ups of our generation. All these start-ups have, had or will impact our lives. Some are part of our daily lives, some are a necessity for the future generation to come but most importantly these all start-ups are helping us in one way or another and the stories behind their start-up ideas are intriguing and motivating everyone to become a successful entrepreneur.

We hope you liked our blog, please let us know with your valuable suggestions and feedback. If you don’t want to miss on any latest blogs, do subscribe to our free newsletter.

In our previous blogs, we discussed how to be a successful...

We have already discussed different aspects related to a startup business...

Client relationships are the root of the success of your business. A...

In our previous blog, we discussed coronavirus and how to prevent...

In this era of Advancement, technology has evolved to the next level...