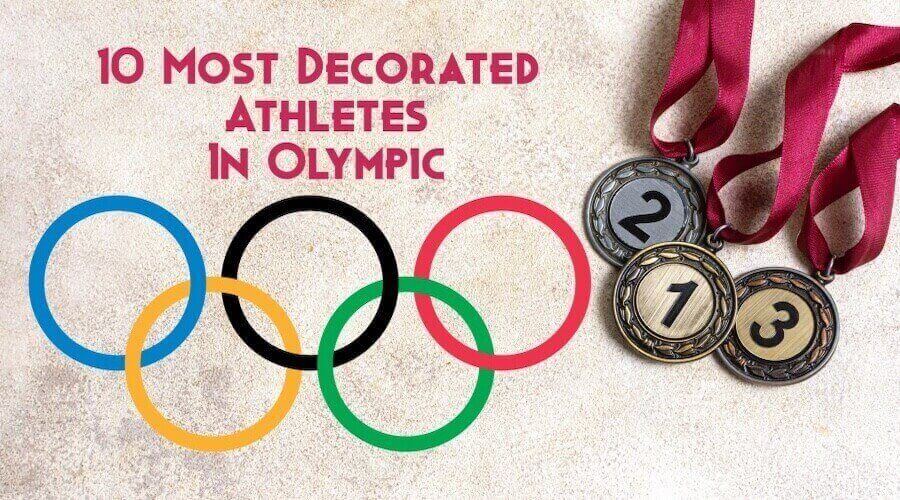 Top 10 Most Decorated Athletes in Olympics

“You can’t put a limit on anything. The more you dream, the farther you get.” - Micheal Phelps

“OLYMPICS” is the dream platform for every athlete to prove themselves. Every athlete’s ultimate goal is to represent their country in the Olympics and win a medal for their country. As we all know Tokyo Olympics are in the process right now and thousands of athletes are competing from more than a hundred countries. So today we have decided to make a list of the most decorated Olympians in history. So let’s start the list of the top 10 most decorated athletes in the Olympics.

Micheal Phelps is a 36 years old former American swimmer. Micheal first qualified for the Olympics in 2000 when he was just 15 years old, although he didn’t win any medals in that Olympics, he did become the youngest American swimmer to qualify for the Olympics. He was active from 2000-2016 and won 23 gold, 3 silver and 2 bronze making him the most successful and decorated Olympian ever.

Nikolai Andrianov was a Gymnast from the Soviet Union and Russia. He won his first Olympic gold medal in 1972 and then later in 1976 he won 4 gold medals in gymnastics and dominated the competition. Nikolai was active in Olympics from 1972 to 1980 and won 7 gold, 5 silver and 3 bronze Olympic medals.

Boris Shakhlin was a former Soviet Union ( Russia) gymnast. Boris was announced as the overall champion in the 1960 Olympics. He was active in Olympics from 1956 - 1964 and won 7 gold, 4 silver and 2 bronze medals in Olympics.

Edoardo Mangiarotti was an Italian fencer. He was active in Olympics from 1936-1960 and won 6 gold, 5 silver and 2 bronze Olympic medals. Edoardo is still considered the best fencer even after 60 years of his retirement no one has been able to match his records.

Takashi Ono is a 90 years old Japanese gymnast. He competed in the 4 Olympics from 1952 to 1964. Takashi Ono won 5 gold, 4 silver and 4 bronze Olympic medals. He was added to the international gymnastic hall of fame in 1998.

Paavo Nurmi was a middle-distance and long-distance runner from Finland. Nurmi was active in Olympics from 1920 to 1928 and won 9 gold and 3 silver medals in Olympics. During his career, Paavo Nurmi was in a lot of controversies and even got suspended by the Olympic committee but that didn’t stop him from activating his goals of becoming a successful athlete.

Brigit Fischer is a 59 years old former Kayaker from Germany. She was active in Olympics from 1980 to 2000 and won 8 gold and 4 silver medals. In 2004 Birgit Fischer was chosen a German sportswoman of the year.

Sawao Kato is a 74 years old gymnast from Japan. Kato is one of the only ten athletes who has won 8 or more gold medals in the Olympics. Sawao Kato was active in Olympics from 1968 to 1976 and won 8 gold, 3 silver and 1 bronze medal.

Jenny Thompson is a 48 years old Swimmer from America. Jenny was active in Olympics from 1992 to 2004 and 8 gold, 3 silver and 1 bronze medal. In 2004 Jenny was the oldest member at the age of 31 to represent the American swimming team in the Olympics, she played an important part in her team winning a medal.

These are the most decorated athletes in Olympic history. Let us know how you feel about these athletes in the comment box below.

“Lots of companies don't succeed over time. What do they...

“India” the biggest democracy in the world, you all have heard it but the question is...

GDP of India is at the bottom of the ocean for the first time in history with a decline...

We all are familiar with the tale of the rabbit and the tortoise. Slow and steady wins...

“Content is King but Distribution is Queen and she wears the...

So, you’ve decided to become a content writer but are a bit...