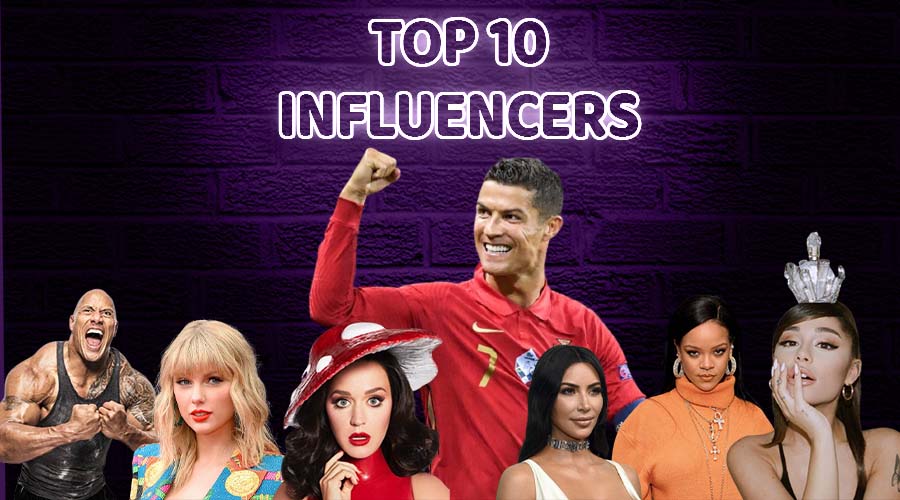 Cristiano Ronaldo is a Portuguese professional football player born on 5th February 1985. As of April 2021, Cristiano Ronaldo is the top social media influencer with more than 500 million followers. He charges around 1 million USD per post on social media. It is very easy to understand that how powerful he is because when he removed the coke bottle from a table and replaced it with water, coca-cola lost 4 billion in revenue.

Taylor Swift is an American singer and songwriter born on 13th December 1989. Taylor Swift has more than 370 million followers on social media and charges USD 722000 per post. Taylor Swift being in controversy because of her lyrics make makes her more desirable to advertisement agencies.

Katy Perry is an American singer, songwriter and TV judge born on 25th October 1984. Katy Perry started her career in gospel music when she was a teen. Katy Perry has more than 340 million social media followers and charges around USD 500000 per post.

Rihanna is a Barbadian singer, actor, songwriter and businesswoman born on 20th February 1988. Rihanna has more than 337 million followers across social media and charges USD 450000 per post.

Kim Kardashian is an American model, influencer and businesswoman born on 21st October 1980. With more than 334 million followers across social media, Kim Kardashian charges around USD 500000 per post.

Dwayne Johnson aka The Rock is an American actor, producer and retired wrestler born on 2nd May 1972. Dwayne ‘The Rock’ Johnson is the highest-paid actor for social media posts, he charges USD 1015000 per post.

Kylie Jenner is an American influencer and businesswoman born on 10th August 1997. Kylie Jenner is the second-highest paid person on social media after Dwayne Jonson, she charges USD 986000 per post.

We hope you get a better understanding of the importance of social media and how big social media is.
We hope you like our blog, please make sure to let us know in the comment box below that what you think about it. Make sure to subscribe to our free newsletter and stay updated about our latest blogs.

“There is more treasure in books than in all the pirate’s loot...

“If you really look closely, most overnight successes took a long...

Cryptocurrencies or “Digital Gold” as they are referred to by...

In our previous blog, we discussed coronavirus and how to prevent...

What is VPN? VPN short form for a virtual private network. But why should...

Are you a blogger?Are you looking to build a WordPress website?Are you searching for the...