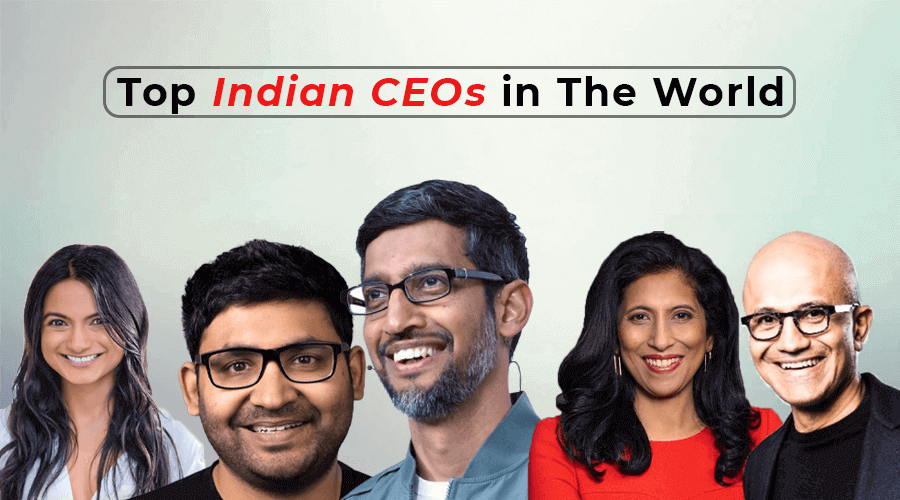 INDIA has always been the land of greatness, India has given many great leaders and entrepreneurs to the world. Either it is Kamala Harris (Vice- president of USA) or Sundar Pichai (CEO of Alphabet) Indians have proved themselves in every field across the globe. So, today we are going to discuss the Indian-origin CEOs of top corporations across the globe.

Sunder Pichai was born in the State of Tamil Nadu in India on June 10, 1972. He did his graduation from IIT Kharagpur in metallurgical engineering and later moved to US for his masters from Stanford University. Sundar Pichai joined Google in 2004 and played a major role in the development of Google products like Google Chrome, Google Drive, Gmail and Google Maps. In 2015 he became the CEO of Google and in 2019 he was made the CEO Alphabet Inc ( the parent company of google).

Satya Nadella was born in Hyderabad, India on August 19, 1967. He did his graduation from the Manipal Institute of Technology. Satya joined Microsoft in 1992 and played a major role in multiple projects that resulted in making Microsoft one of the largest cloud infrastructure companies in the world. He became the CEO of Microsoft in 2014 and also became the chairman in 2021, before that he was the executive vice president at Microsoft’s cloud enterprise group.

Parag Agrawal was born in the state of Rajasthan in India on May 21, 1984. He did his graduation from IIT Bombay and his masters from Stanford University. Before joining Twitter in 2011, Parag did his internship at Microsoft and Yahoo. He joined Twitter as software engineer and later in 2017 he was promoted to the position of CTO (chief technology officer) and in November 2021 he was appointed as the new CEO of Twitter.

Leena Nair was born in Kolhapur, India on June 11, 1969. She did all her education from India. Leena served as an Chief Human Resource Officer at Unilever till 2016, and December 2021 she was appointed as the CEO of Chanel.

Shantanu Narayen was born in Hyderabad, India on May 26, 1963. He did his graduation from Hyderabad and masters from USA. Shantanu joined Adobe in 1998 as Senior vice-president and became the president and CEO of Adobe in 2005.

Amrapali Gan was born in Mumbai, India in 1984. She graduated from California State University. Amrapali joined Only Fans in 2020 as chief marketing and communications officer and later promoted to the position of CEO in December 2021.

This is the list of a few Indians who are at the top positions in the world's biggest companies. Let us know what are your thoughts on this in the comment box below.

Make sure to subscribe to our newsletter to receive notifications about our latest blogs and updates.

In November, 2021 Elon Musk has surpassed Jeff Bezos to...

The world has already seen two world wars and we surely don’t need to discuss what...

The Internet has become an important part of all our lives. A single day...

Do you know that more than 4 million blogs are being posted on world wide web everyday?...