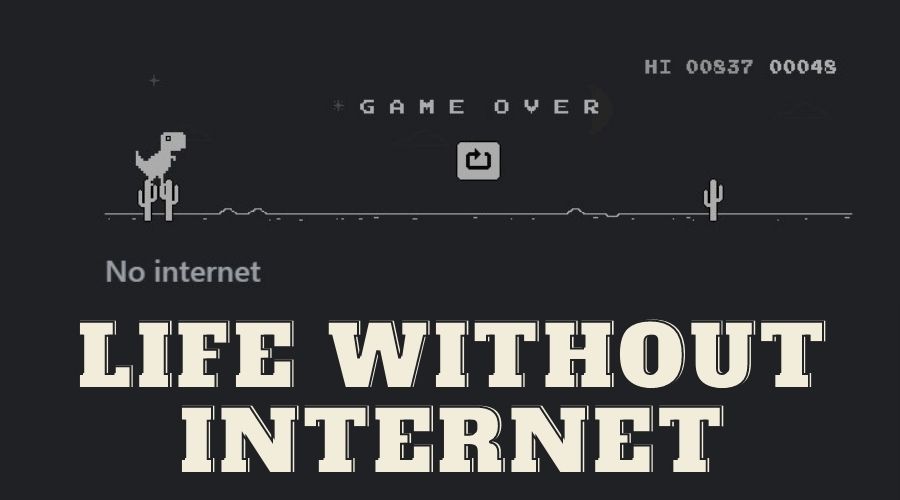 What happens if Internet shuts down for a day?

The Internet has become an important part of all our lives. A single day doesn’t go by when we stay away from the internet. But, have you ever wondered what will happen if the internet shuts down for a day?
We all know that it is an impossible scenario but there is no denying the fact that it is quite possible. Everything in the world is being digitized from banking, transportation, the health sector to our daily entertainment, etc. More than half of the total population of the world is somewhat connected to the internet in some way. Our reliance on the internet is gaining every day. It has grown so much that for many people, going without the internet for a few hours is an unthinkable thing.

Anyone in the world that has used the internet will admit that it has made our lives relatively easy.
So, do you also wonder how the internet shut down can impact your life or how it would impact the world? Well, it might not be something that you expect, so, let’s see.
A world without the internet would be a very strange world for us as even basic services like texting or calling will also be shut down. It would take us back to the Stone Age. The impact of the internet shut down would be seen in these sectors:

Most of the work sector nowadays is digitized, everything from files, schedules to meeting systems are all saved and done on cloud computing. If the internet shuts down, the work sector will also shut down unless there is a hard copy which is highly unlikely.
Maybe 5/10 years ago, the work sector believed in the hard copies but not today. Now, everything is put on internet and managed there. Even the files which were available are put on the internet to make it available to everyone and anytime.

Our whole communication system is a part of the internet infrastructure and when the internet is down, everything will go along with it. We wouldn’t be able to make any calls, video calls or send any text. Emails will also be gone so we will be left without anything but just dead phones that will only be capable of scrolling through our gallery.
In today’s time, people even keep their photos online. So, those people will have nothing to do.

Transportation has also become internet-enabled in the last few years. However, despite this fact, the transportation sector wouldn’t get much affected with a day of internet shut down. Planes, trains and even buses in many countries use the internet for navigational purposes but it could be done with appropriate measures.
The air traffic control use radio signals to communicate, so, it won’t get affected by the shutdown of internet. The logistics business might get a little affected but that too only mere as compared to other sectors.

Social Media is our favourite time pass and if the internet goes down for a day, we will lose that time pass. For some people, Facebook is still their life and without the internet, their life would be so done. Talking about Google, everybody is addicted to Google in one way or another.
People all over the world need Google in their day-to-day life. For many people, Google means the internet. It also serves students in many ways. So, a day without Google will be a nightmare for so many and many people who look up for everything on Google would become dumb once again.
This is only about people but it will also have a huge impact on Google and other businesses such as Facebook. According to recent surveys, Google and Facebook will lose around $200 Million at the end of that day.

Advancement in digital technology and the internet has enabled the health care system to go digital in every aspect possible. The Internet has revolutionized the health care sector. The patient is able to connect to their doctor from the convenience of their homes but without the internet, it wouldn’t be possible. People also use apps to get medicines delivered to their homes and without the internet; they have to go out doing it themselves.
Internet shut down might not result in a life-death situation but it would definitely affect a lot of people in health care. Even doctors wouldn’t be able to find the history of patients as most of those are saved online. Still, the hospitals will be open and the situation of life & death wouldn’t come from this.

Our reliability on the internet is very high and we are not suggesting in any way that we should change it. The shutdown of the internet is highly unlikely so, keep it going as it is and don’t worry about it as long as it is not happening.
There are many more sectors that will be affected with the internet shut down but these sectors are the ones which get affected the most. Hope you enjoyed it and found it somewhat interesting.

One thing that is common among everyone around the world is that everyone dreams of being...

An entrepreneur always dreams of one thing, that is owning a successful business and the...

Covid-19 is still far from over, but the battle is going on. The best way to defeat a...

“GAMING” when you hear this word, the first thing that comes to...

In our previous blog, we had discussed the importance of social media. It is...

Are you a Blogger?Are you looking for passive income?Are you familiar with affiliate...