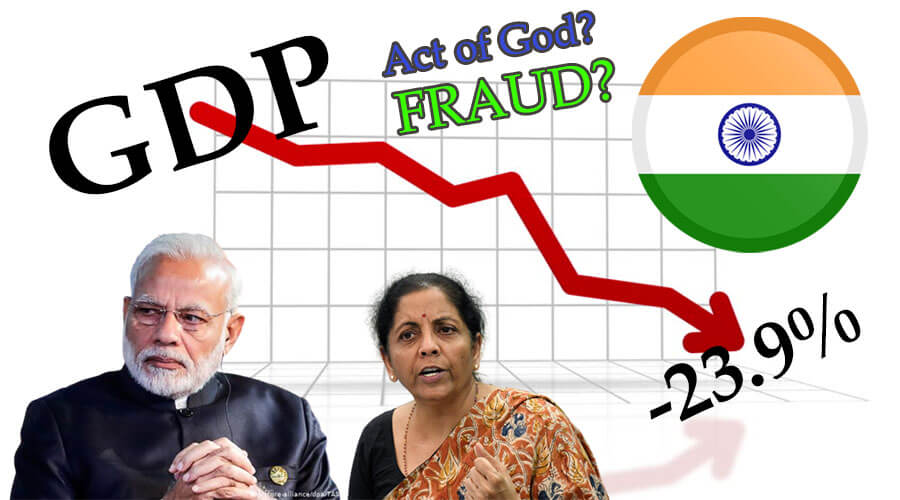 GDP of India: Act of God or Fraud?

GDP of India is at the bottom of the ocean for the first time in history with a decline of 23.9% in the first quarter of 2020-21. But do you know the difference between Indian GDP 2020 and Titanic? At least people on Titanic had some hope but GDP for India has no hope left as the current finance minister of India ‘Mrs. Nirmala Sitharaman’ doesn’t even care to face the truth, she just blames it on god and leaves it to them. But the question arises: Is it really the act of God or act of fraud by the government?

What is GDP of India?

Gross domestic product or GDP of India latest in the first quarter of the year 2020-21 is at an all-time low with -23.9% and that’s not all, these are just provisional figures. The real impact of Indian GDP quarter-1 2020 might be more devastating than all of these figures. This is the worst GDP drop in the history of Indian economics. Just for your understanding of how bad the situation is, we have some data for you. The Fiscal deposit has reached the value of above 100%, so the government has no money to spend now which means no more development. The income of a common man has decreased but the expenses kept on increasing.

GDP shows the reality of any country, it is like a mirror showing what is happening around you. The GDP of any country depends on many sectors but we can divide these sectors into 4 categories:

These all sectors need to work positively for a positive outcome on GDP but things have been worse since the COVID outbreak and the lockdown made it even worse. In India’s case, 3 out of 4 were impacted negatively and the result is India has the worst GDP across all other major countries.

The whole India was under lockdown so the demand and supply chain was broken, hence the consumption decreased.  The decrease of consumption led to no or very low investments by the industries and both the sectors were down. In a report, the biggest automobile company of India “Maruti Suzuki” stated that they didn’t sell a single automobile in the months of lockdown. In another report, it was found that the cell phone demand in India during the lockdown was almost zero.

The import and exports are a major part of any economy; India is one of the biggest importers of oil in the whole world. During the lockdown months, the consumption of petrol-diesel declined and hence the imports also declined. The same goes for exports, when everything was shut nothing was manufactured so nothing was exported. However, government spending was very high during the lockdown phase but it was not enough to take care of the entire negative from other sectors.

Slump in growth of each sector:

The only sector that had some positive outcomes is agriculture but it was not because more crops were harvested this year or anything. It is just that food is an essential commodity and it was not shut during the lockdown phase too.

GDP of India As Compared To Other Countries

There are many reasons for this but the biggest one is a complete lockdown. India imposed the world’s biggest lockdown to stop the spread of COVID-19 without even understanding the impact it will have. Even China only shut Wuhan where the virus originated, not entire China. The government should have given the power to states to impose lockdown accordingly. The impact of lockdown was very severe, 130 million jobs were lost and India was losing around 4.5 Billion U.S dollars every day in the first 21-day lockdown.

Now, the GDP is at an all-time low and negative for the first time in nearly 50 years. Our beloved Finance minister called it “An act of God” but somebody needs to ask her, how was GDP doing before this pandemic?

Her answers always a world apart from the truth but the answer is the GDP of India last quarter was at 4.2% and it was declining for a long time. Every quarter there was a drop in GDP, so India had this coming. It’s just that pandemic fast-tracked it. India used to be characterized as a developing market economy but this will take India back at least 10 years. The situation is so severe that it will at least take 2-3 years to reach the 0 marks when we talk about the GDP.

All of this makes believe that the GDP of India is not the top priority of the Indian government. They rather build the tallest statue than worry about GDP.

Now, let’s see if it was just an act of god or another fraud?

The government is only blaming the pandemic but payment stalled years ago. Every step that the Indian government took in the last few years has led India here. Every major decision by the government backfired but they kept telling the public that everything has worked fine and everything is good but if you look at the numbers nothing is fine. BJP showed that IMF projected India will be leading in GDP among all other countries in 2020 but that was old data from long ago. Actually, IMF projected that Indian GDP will be at -4.7% and that was even before the pandemic, so it was clear that India was already heading this way.

● Demonetization was the worst economic policy; it didn’t bring any black money back as it was promised or did any of you really got 1.5 million? From the last 8 quarters, the GDP of India is only coming down. This graph is enough to show you how the GDP declined every year since the year of demonetization. GDP of India year wise:

● GST failed miserably, tax collection in India is at the lowest and this is the biggest tax shortfall in the history of the nation. The government has no money to spend on development so they are selling PSUs to private companies to generate some money. 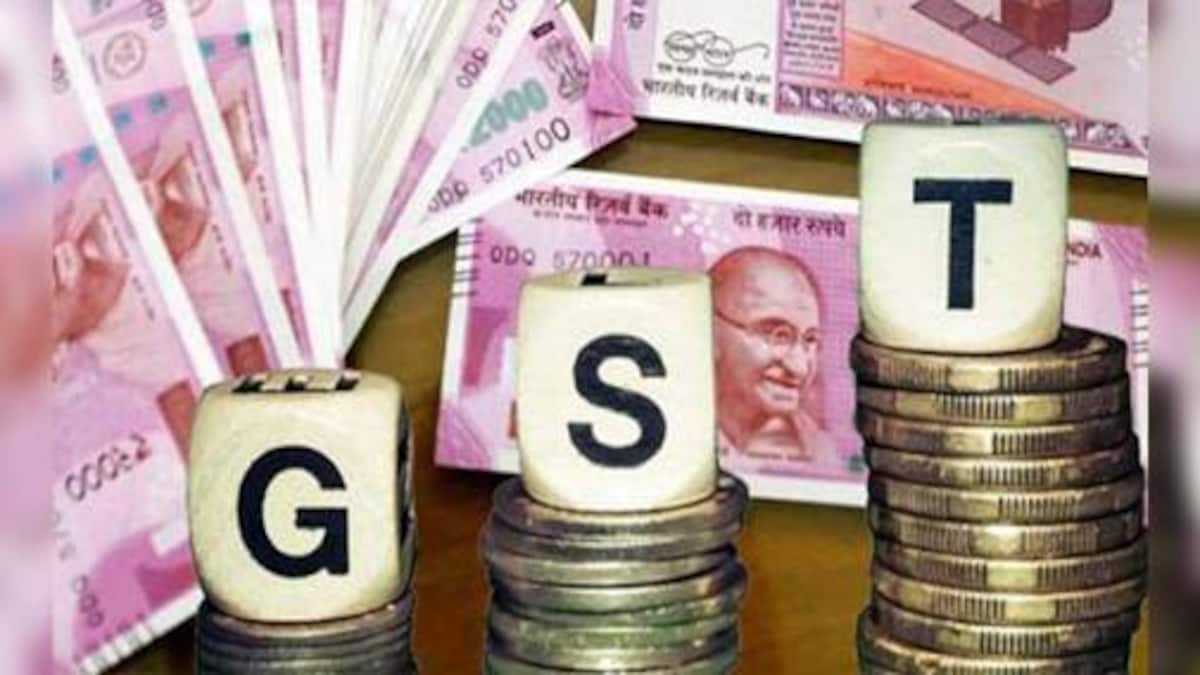 ● Make in India/Aatamnirbhar Bharat are not anything more than words.

● Denial is the biggest cause of everything happening here. The government is in total denial mode and doesn’t even admit that problem is severe. As long the government is not ready to accept its fault, the situation will never solve.

How To Make It Right?

There are many things that can be tried or done to make sure the GDP growth comes back to the track. We as citizens can also make a huge difference by buying products that are made in India and helping small businesses grow. Although much bigger steps should be taken by the government to make it right, it might not happen in one quarter or two but certainly, we can be back on track in a year or two if the government tries. Here are some things that the government needs to do on an urgent basis to help revive the GDP:

● Focus on ease of doing business.

Whole India was fed up with the rule of Congress government, their frauds, price hikes and corruption everywhere. The youth of India wanted a new government whom they can trust; they believed in Mr Modi and thought he will be the one who will take care of everything for them as he also promised in his speeches before elections. The Current Prime Minister of India, Mr Modi accused Congress government of everything but back then India was one of the fastest-growing economies, the Indian GDP graph was going up every quarter.

Now things have changed, GDP is only going down with no hope of coming back up again, India is no more in the race of most developing countries and the unemployment rate is almost triple of that congress rules time and is at highest in the last 45 years. Well, god is the culprit here, to be honest; I mean how he dares give anyone the questionable ability to ask anything against the government. Calling it fraud when other governments do it and making it an act of god when your government does it, another masterstroke by Mr Modi. "Modi hai toh mumkin hai".

Apart from this, you got to love this government of India, they know how to take care of its public or should I say play with their minds. Every time something comes up against the government, they find something else to deviate the minds from the problems. The best and current example being when the GDP of India came into limelight and how the government is failing at everything they promised, the divergence of India vs. China came up with more apps banned. It surely took people’s minds off the GDP problem. Waah Modi Ji waah.

India has seen many politicians but never seen someone like Finance Minister Mrs Nirmala Sitharaman, her responses whenever questioned about the problems are epic. When she was questioned about the slowdown in the auto industry, she came up with such a witty reply and blamed millennials for it. She said that today’s youth doesn’t want to invest in EMI to buy an automobile, instead prefers to take Ola, Uber, or the metro. Well, this should be a warning for you there can be a fall in the rupee coming now, as youth invests in crypto-currency or housing problems as youth uses Oyo hotels or Airbnb instead of buying houses.

Another witty reply came when she was asked about increased onion prices she replied that her family doesn’t use onions. Wow, that must be the reason why the government sold BSNL, or railways because they don’t use them anymore, they use Jio and metro now. Well, she might not be the best or brightest of Finance ministers but she surely is the savage one.

Conclusion: After reading these facts and figures, we are sure you are clearly able to decide between the act of god and fraud. The thing is these governments will always keep fighting and find new ways to make people fight for them but one thing, Indian people should keep in mind is that these governments are not bigger than our country “India”.

Disclaimer: We are not anti-government or anti-nationalist, nor we support the ideology of any government. We just want all of you to know what is going on around you.

We hope you liked our blog, if you have any suggestions or complaints please write to us. If you don’t want to miss out on any updates, subscribe to our free newsletter.

In this modern time, it is impossible to imagine a business without technology. Small...

A business is set up on some basic principles or so-called pillars like management,...

We have already discussed the different aspects related to blogging. Today, in this blog...